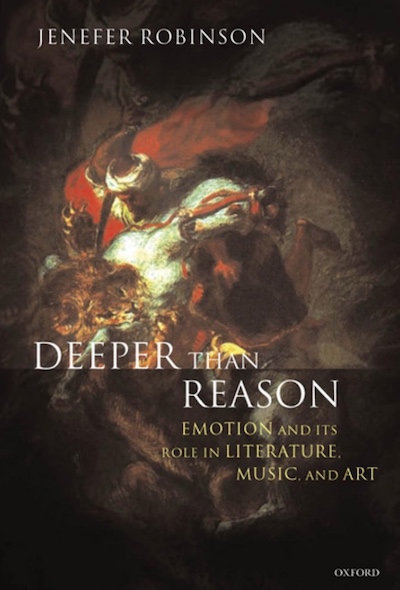 Deeper than Reason takes the insights of modern psychological and neuroscientific research on the emotions and brings them to bear on questions about our emotional involvement with the arts. Robinson begins by laying out a theory of emotion, one that is supported by the best evidence from current empirical work on emotions, and then in the light of this theory examines some of the ways in which the emotions function in the arts. Written in a clear and engaging style, her book will make fascinating reading for anyone who is interested in the emotions and how they work, as well as anyone engaged with the arts and aesthetics, especially with questions about emotional expression in the arts, emotional experience of art forms, and, more generally, artistic interpretation.

Part One develops a theory of emotions as processes, having at their core non-cognitive "instinctive" appraisals, "deeper than reason", which automatically induce physiological changes and action tendencies, and which then give way to cognitive monitoring of the situation. Part Two examines the role of the emotions in understanding literature, especially the great realistic novels of the nineteenth century. Robinson argues that such works need to be experienced emotionally if they are to be properly understood. A detailed reading of Edith Wharton's novel The Reef demonstrates how a great novel can educate us emotionally by first evoking instinctive emotional responses and then getting us to cognitively monitor and reflect upon them. Part Three puts forward a new Romantic theory of emotional expression in the arts. Part Four deals with music, both the emotional expression of emotion in music, whether vocal or instrumental, and the arousal of emotion by music. The way music arouses emotion lends indirect support to the theory of emotion outlined in Part One.

While grounded in the science of emotion, Deeper than Reason demonstrates the continuing importance of the arts and humanities to our lives.