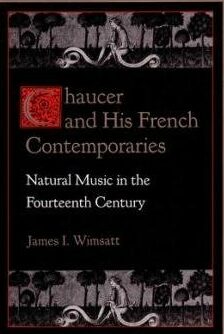 In this provocative and highly acclaimed study, a distinguished Chaucerian provides the first comprehensive analysis of the contemporary French influence on Chaucer. Bringing to the subject his expertise in both Chaucer and fourteenth-century French literature, James I. Wimsatt reveals the range and complexity of Chaucer's literary and personal relations with the important but neglected French poets of the fourteenth century. He demonstrates how the body of Middle French verse can open new avenues into the fundamental nature of Chaucer's poetry.

Chaucer and His French Contemporaries synthesizes Winsatt's work on Chaucer's French connections over the past twenty-five years, particularly his studies and editions of Machaut. At the same time, much is new: an analysis of the meaning of 'natural music' in the light of Deschamps' and Machaut's critical observations, a presentation of Jean de le Mote as a seminal influence in young Chaucer's poetic environment, a demonstration of the parallels and divergences of Froissart's and Chaucer's literary careers, an exposition of Granson's broad borrowings from his English friend, and a fresh look at the puys, the pourgeois poetic societies that flourished in northwest France and London.