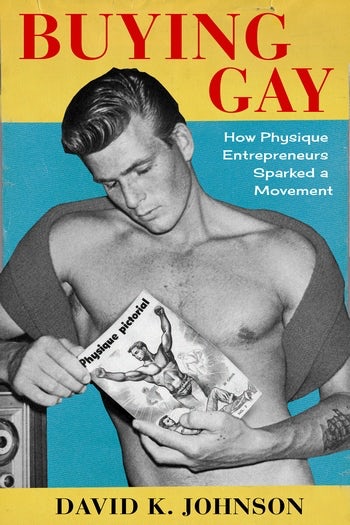 In 1951, a new type of publication appeared on newsstands—the physique magazine produced by and for gay men. For many men growing up in the 1950s and 1960s, these magazines and their images and illustrations of nearly naked men, as well as articles, letters from readers, and advertisements, served as an initiation into gay culture. The publishers behind them were part of a wider world of “physique entrepreneurs”: men as well as women who ran photography studios, mail-order catalogs, pen-pal services, book clubs, and niche advertising for gay audiences. Such businesses have often been seen as peripheral to the gay political movement. In this book, David K. Johnson shows how gay commerce was not a byproduct but rather an important catalyst for the gay rights movement.

Offering a vivid look into the lives of physique entrepreneurs and their customers, and presenting a wealth of illustrations, Buying Gay explores the connections—and tensions—between the market and the movement. With circulation rates many times higher than the openly political “homophile” magazines, physique magazines were the largest gay media outlets of their time. This network of producers and consumers helped foster a gay community and upend censorship laws, paving the way for open expression. Physique entrepreneurs were at the center of legal struggles, especially against the U.S. Post Office, including the court victory that allowed full-frontal male nudity and open homoeroticism. Buying Gay reconceives the history of the gay rights movement and shows how consumer culture helped create community and a site for resistance.