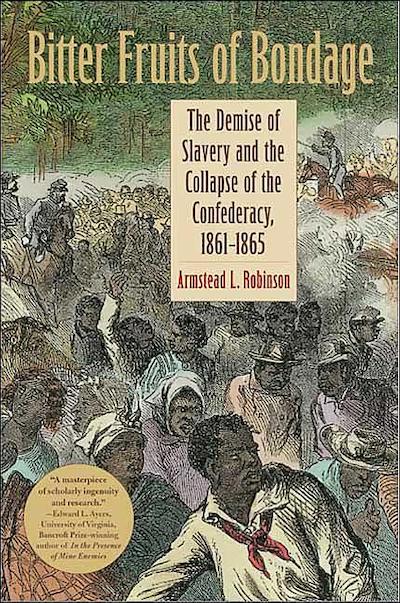 Bitter Fruits of Bondage is the late Armstead L. Robinson’s magnum opus, a controversial history that explodes orthodoxies on both sides of the historical debate over why the South lost the Civil War.

Recent studies, while conceding the importance of social factors in the unraveling of the Confederacy, still conclude that the South was defeated as a result of its losses on the battlefield, which in turn resulted largely from the superiority of Northern military manpower and industrial resources. Robinson contends that these factors were not decisive, that the process of social change initiated during the birth of Confederate nationalism undermined the social and cultural foundations of the southern way of life built on slavery, igniting class conflict that ultimately sapped white southerners of the will to go on.

In particular, simmering tensions between nonslaveholders and smallholding yeoman farmers on the one hand and wealthy slaveholding planters on the other undermined Confederate solidarity on both the home front and the battlefield. Through their desire to be free, slaves fanned the flames of discord. Confederate leaders were unable to reconcile political ideology with military realities, and, as a result, they lost control over the important Mississippi River Valley during the first two years of the war. The major Confederate defeats in 1863 at Vicksburg and Missionary Ridge were directly attributable to growing disenchantment based on class conflict over slavery.

Because the antebellum way of life proved unable to adapt successfully to the rigors of war, the South had to fight its struggle for nationhood against mounting odds. By synthesizing the results of unparalleled archival research, Robinson tells the story of how the war and slavery were intertwined, and how internal social conflict undermined the Confederacy in the end.