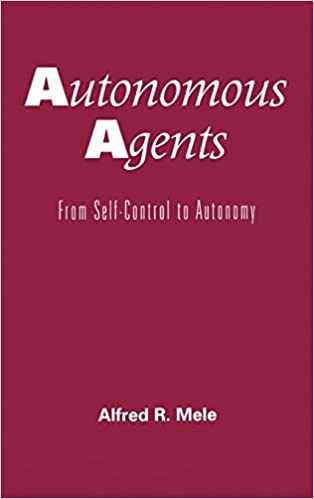 Explores the related topics of self‐control and personal autonomy. Self‐control is understood as the contrary of akrasia or weakness of will, and autonomy is placed in the family of metaphysical freedom concepts: most notably, free will, free choice, and free action. The book's first half develops an analysis of the nature of self‐control and explains the potential influence of self‐control on actions, beliefs, reasoning, emotions, and values. It also develops an account of an ideally self‐controlled person and argues that even such a person will fall short of autonomy. The second half of the book first asks what may be added to ideal self‐control to yield autonomy and then defends two distinctive answers, one for compatibilist believers in autonomy (believers in autonomy who see it as compatible with determinism) and another for libertarians (believers in autonomy who see it as incompatible with determinism). The compatibilist answer features an account of control and a sensitivity to agents’ histories, and the libertarian answer adds to this a kind of causal openness that does not require agent causation and that avoids the sort of luck that undermines autonomy and moral responsibility. It is argued that the disjunction of these two answers as applied to actual human beings is more credible than the thesis that there are no autonomous human beings. This is “agnostic autonomism”: the position is agnostic about whether the falsity of determinism is required for autonomy while asserting that it is more credible that there are autonomous human beings than there are not.