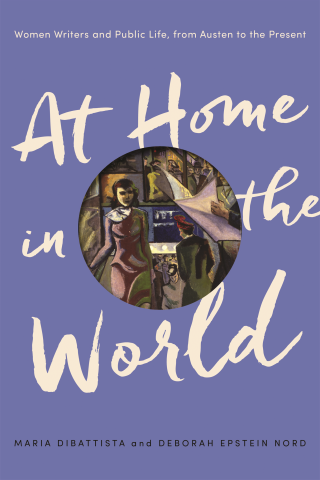 In a bold and sweeping reevaluation of the past two centuries of women's writing, At Home in the World argues that this body of work has been defined less by domestic concerns than by an active engagement with the most pressing issues of public life: from class and religious divisions, slavery, warfare, and labor unrest to democracy, tyranny, globalism, and the clash of cultures. In this new literary history, Maria DiBattista and Deborah Epstein Nord contend that even the most seemingly traditional works by British, American, and other English-language women writers redefine the domestic sphere in ways that incorporate the concerns of public life, allowing characters and authors alike to forge new, emancipatory narratives. The book explores works by a wide range of writers, including canonical figures such as Jane Austen, Charlotte Brontë, George Eliot, Harriet Jacobs, Edith Wharton, Virginia Woolf, Willa Cather, Gertrude Stein, and Toni Morrison; neglected or marginalized writers like Mary Antin, Tess Slesinger, and Martha Gellhorn; and recent and contemporary figures, including Nadine Gordimer, Anita Desai, Edwidge Danticat, and Jhumpa Lahiri. DiBattista and Nord show how these writers dramatize tensions between home and the wider world through recurrent themes of sailing forth, escape, exploration, dissent, and emigration. Throughout, the book uncovers the undervalued public concerns of women writers who ventured into ever-wider geographical, cultural, and political territories, forging new definitions of what it means to create a home in the world. The result is an enlightening reinterpretation of women's writing from the early nineteenth century to the present day.