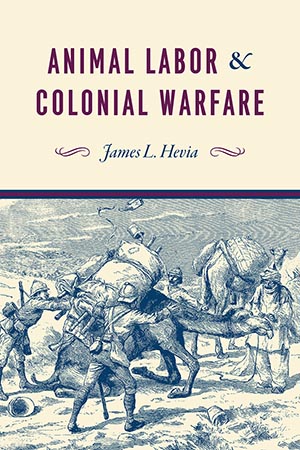 Chicago: The University of Chicago Press, 2018

Until well into the twentieth century, pack animals were the primary mode of transport for supplying armies in the field. The British Indian Army was no exception. In the late nineteenth century, for example, it forcibly pressed into service thousands of camels of the Indus River basin to move supplies into and out of contested areas—a system that wreaked havoc on the delicately balanced multispecies environment of humans, animals, plants, and microbes living in this region of Northwest India.

In Animal Labor and Colonial Warfare, James Hevia examines the use of camels, mules, and donkeys in colonial campaigns of conquest and pacification, starting with the Second Afghan War—during which an astonishing 50,000 to 60,000 camels perished—and ending in the early twentieth century. Hevia explains how during the nineteenth and twentieth centuries a new set of human-animal relations were created as European powers and the United States expanded their colonial possessions and attempted to put both local economies and ecologies in the service of resource extraction. The results were devastating to animals and human communities alike, disrupting centuries-old ecological and economic relationships. And those effects were lasting: Hevia shows how a number of the key issues faced by the postcolonial nation-state of Pakistan—such as shortages of clean water for agriculture, humans, and animals, and limited resources for dealing with infectious diseases—can be directly traced to decisions made in the colonial past. An innovative study of an underexplored historical moment, Animal Labor and Colonial Warfare opens up the animal studies to non-Western contexts and provides an empirically rich contribution to the emerging field of multispecies historical ecology.