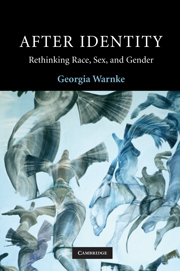 Social and political theorists have traced in detail how individuals come to possess gender, sex and racial identities. This book examines the nature of these identities. Georgia Warnke argues that identities, in general, are interpretations and, as such, have more in common with textual understanding than we commonly acknowledge. A racial, sexed or gendered understanding of who we and others are is neither exhaustive of the 'meanings' we can be said to have nor uniquely correct. We are neither always, or only, black or white, men or women or males or females. Rather, all identities have a restricted scope and can lead to injustices and contradictions when they are employed beyond that scope. In concluding her argument, Warnke considers the legal and policy implications that follow for affirmative action, childbearing leave, the position of gays in the military and marriage between same-sex partners.