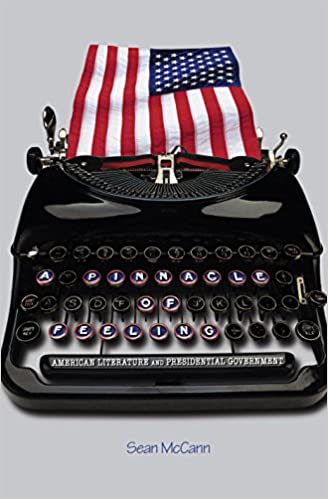 There is no more powerful symbol in American political life than the presidency, and the image of presidential power has had no less profound an impact on American fiction. A Pinnacle of Feeling is the first book to examine twentieth-century literature’s deep fascination with the modern presidency and with the ideas about the relationship between state power and democracy that underwrote the rise of presidential authority.

Sean McCann challenges prevailing critical interpretations through revelatory new readings of major writers, including Richard Wright, Gertrude Stein, Henry Roth, Zora Neale Hurston, Saul Bellow, Ralph Ellison, Norman Mailer, Don Delillo, and Philip Roth. He argues that these writers not only represented or satirized presidents, but echoed political thinkers who cast the chief executive as the agent of the sovereign will of the American people. They viewed the president as ideally a national redeemer, and they took that ideal as a model and rival for their own work.

A Pinnacle of Feeling illuminates the fundamental concern with democratic sovereignty that informs the most innovative literary works of the twentieth century, and shows how these works helped redefine and elevate the role of executive power in American culture.