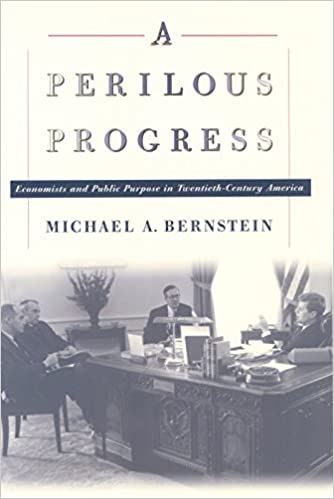 The economics profession in twentieth-century America began as a humble quest to understand the “wealth of nations.” It grew into a profession of immense public prestige — and now suffers a strangely withered public purpose. Michael Bernstein portrays a profession that has ended up repudiating the state that nurtured it, ignoring distributive justice, and disproportionately privileging private desires in the study of economic life. Intellectual introversion has robbed it, he contends, of the very public influence it coveted and cultivated for so long. With wit and irony he examines how a community of experts now identified with uncritical celebration of ”free market” virtues was itself shaped, dramatically so, by government and collective action.

In arresting and provocative detail Bernstein describes economists’ fitful efforts to sway a state apparatus where values and goals could seldom remain separate from means and technique, and how their vocation was ultimately humbled by government itself. Replete with novel research findings, his work also analyzes the historical peculiarities that led the profession to a key role in the contemporary backlash against federal initiatives dating from the 1930s to reform the nation’s economic and social life.

Interestingly enough, scholars have largely overlooked the history that has shaped this profession. An economist by training, Bernstein brings a historian’s sensibilities to his narrative, utilizing extensive archival research to reveal unspoken presumptions that, through the agency of economists themselves, have come to mold and define, and sometimes actually deform, public discourse.

This book offers important, even troubling insights to readers interested in the modern economic and political history of the United States and perplexed by recent trends in public policy debate. It also complements a growing literature on the history of the social sciences. Sure to have a lasting impact on its field, A Perilous Progress represents an extraordinary contribution of gritty empirical research and conceptual boldness, of grand narrative breadth and profound analytical depth.