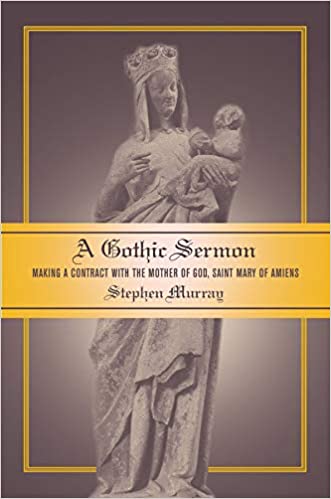 In this groundbreaking work, Stephen Murray seizes a rare opportunity to explore the relationship between verbal and visual culture by presenting a sermon that may have been preached during the second half of the thirteenth century in or near the cathedral of Notre-Dame of Amiens, whose sculptural program was completed at about the same time. In addition to providing a complete transcription and translation of the text, Murray examines the historical context of the sermon and draws comparisons between its underlying structure and the Gothic portals of the cathedral. In the sermon, as in the cathedral, he finds a powerful motivational mechanism that invites the repentant sinner to enter into a new contract with the Virgin Mary.

The correlation between elements of the sermon's text and the sculptural components of the cathedral leads to an exploration of the socioeconomic conditions in Picardy at the time and a vivid sketch of how the cathedral and its images were used by ordinary people. The author finds parallels in the rhetorical tools used in the sermon, on the one hand, and stylistic and compositional tools used in the sculpture, on the other. In addition to providing a fascinating and cogent consideration of medieval beliefs about salvation and redemption, this book also lays the groundwork for a long overdue examination of the performative and textual in relationship to sculpture.