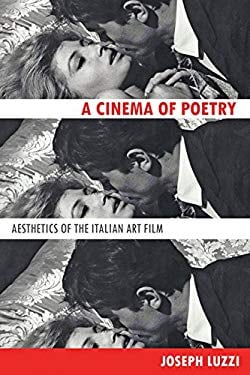 A Cinema of Poetry brings Italian film studies into dialogue with fields outside its usual purview by showing how films can contribute to our understanding of aesthetic questions that stretch back to Homer. Joseph Luzzi considers the relation between film and literature, especially the cinematic adaptation of literary sources and, more generally, the fields of rhetoric, media studies, and modern Italian culture.

The book balances theoretical inquiry with close readings of films by the masters of Italian cinema: Roberto Rossellini, Vittorio De Sica, Luchino Visconti, Michelangelo Antonioni, Federico Fellini, Pier Paolo Pasolini, Bernardo Bertolucci, and others. Luzzi's study is the first to show how Italian filmmakers address such crucial aesthetic issues as the nature of the chorus, the relation between symbol and allegory, the literary prehistory of montage, and the place of poetry in cinematic expression—what Pasolini called the "cinema of poetry."

While Luzzi establishes how certain qualities of film—its link with technological processes, capacity for mass distribution, synthetic virtues (and vices) as the so-called total art—have reshaped centuries-long debates, A Cinema of Poetry also explores what is specific to the Italian art film and, more broadly, Italian cinematic history. In other words, what makes this version of the art film recognizably "Italian"?