The first of the National Humanities Center’s summer institutes in digital humanities, devoted to digital textual studies, will convene for two one-week sessions, first in June 2015 and again in 2016. The objective of this Institute is to develop participants’ technological and scholarly imaginations and to combine them into a powerful investigative instrument. Led by Willard McCarty and Matthew Jockers, the Institute aims to further the development of individual as well as collaborative projects in literary and textual studies.

The Institute will focus on the problematic intersection of textual humanities and digital computing and will emphasize the transformative effects of each upon the other. It will involve both reasoning about text with digital tools and constructing tools to extend the scope and depth of reading. Moving recursively from formulating questions to experimental probing of text, the Institute will be both theoretically and practically oriented. Through direct practical work, participants will be able to engage with and analyze new styles of reasoning offered to the humanities by digital computing. This engagement will involve participants in a struggle to bring together the logic and formal language of computing with modes of reading and questioning traditional to the humanities without dilution of either.


The Institute is conceived as theoretically agnostic and unrestricted as to language, disciplinary approach or historical period; close attention to text and/or to data derived from textual corpora will serve as the basis for theorization. Among other topics, participants will be asked to reflect on what is now possible in digital textual studies and what is not, and on the means by which the traditional strengths of the humanities—development of interpretive skills and critical evaluation; sensitivity to historical context; and close observation of particularities—might enhance computational approaches to cultural phenomena. The Institute’s conveners aim to make explicit the questions that humanities scholars ask, before translating them into actionable manipulations and explorations of data at both the small and large scales (a.k.a. close and distant reading). By transforming these data into multiple forms and formats, it is hoped that new patterns and insights will emerge along with new means of communicating these insights through an indefinitely flexible medium.
Unlike many summer schools and camps in digital humanities, the Institute is not primarily concerned with technological training, rather it aims at developing a hands-on, practically oriented technological imagination. Tools change, methods come and go. Much impressive work has been done and can be done, but in comparison to the demands of research in the interpretative disciplines, the power of digital humanities is mostly potential. So much remains to be discovered, invented and put to the test that only the scholar with a technologically educated imagination will be able to remain a productive participant in the digital aspects of his or her research. Hence the problem that the Institute is dedicated to address. 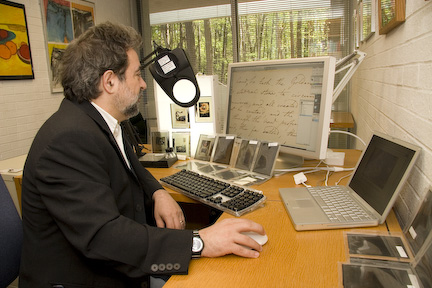 The Institute is intended for the kind of scholar that the National Humanities Center normally selects for residential fellowships, i.e. mid-career or senior scholars working in any area of the humanities. Fifteen participants will be chosen by the conveners following an open application process in which candidates are asked to submit a one-page proposal of the research interests they intend to develop, a curriculum vitae, and a cover letter. Extensive background in technology is not required but is welcome. Far more important is evidence of curiosity and imaginative intelligence, commitment to venturing outside usual habits of thought, and an inclination to skeptically question commonplace assumptions and claims made for computing in the humanities. Applications will be judged on the quality and potential of the proposal and on the scholarly record of the applicant. The proposal may envision, for example, design and creation of a digital object in prototype, a significant and original application of one or more existing tools to a scholarly problem, or development of a critical study impossible otherwise to undertake. Proposals involving collaboration (for example with a computer scientist) are welcome, but collaboration or work with a research team is not essential. Arrangements for collaboration are the sole responsibility of the applicant.
In effect participants will be selected on the basis of their ability to advance both digital humanities and their own research. The conveners’ many years of experience suggest that the benefits to such individuals from training of this kind, and so the benefits to their disciplines, are all out of proportion to the effort invested in them.
Successful candidates will be notified by 20 March 2015.

The Institute requires a two-year commitment. It is divided into two one-week sessions, the first 8–12 June 2015, the second 27 June to 1 July 2016. Once selected by the conveners, participants and conveners will work together both to refine the proposals and to fine-tune the Institute before it meets. Participants will be sent articles and books to be read prior to arrival.
For the 2015 session, while renovations at the National Humanities Center are underway, the Institute will meet in the Carolina Inn, Chapel Hill, North Carolina, where participants and conveners will be housed. For the 2016 session the Institute will take place at the National Humanities Center. Transportation will be provided.
During the first session, in 2015, the participants’ initial ideas for projects will be developed, critiqued and refined in light of the methods and techniques introduced in that session. In the year between sessions, participants will be expected to bring their projects to a reasonable state of development, perhaps to the stage of a solid first draft or prototype. They will also be strongly encouraged to keep notes on their work and toward the end of the intervening year to write an essay on its progress and significance. The conveners will correspond with participants during this interval and provide consultation at a distance as time and circumstances permit. With the help of videoconferencing software, a group discussion will be held twice during the year. Participants are advised nevertheless to seek out help and advice from their home institutions.
The second session, in 2016, will devote focused attention to individual projects; there will be presentations and engagement in focused group discussion. Advanced topics will be taken up as the need for them emerges. Participants’ essays will be circulated among participants prior to the 2016 session.
During both sessions participants and conveners will have the opportunity each evening of getting together in a dedicated space at the Carolina Inn for work and discussions. It will be an intense and highly rewarding time.

The Institute will be led by Professor Willard McCarty, Professor in the Department of Digital Humanities, King’s College London, and in the Digital Humanities Research Group, University of Western Sydney. McCarty is winner of the 2013 Roberto Busa Prize for lifetime achievement in the application of information and communications technologies to humanities research, the 2006 Lyman Award for innovation in the use of digital technology for the humanities, and is a widely acknowledged authority on the digital revolution in humanistic scholarship. His current book project is a history of digital humanities from its beginnings in 1949 to the onset of the Web in the 1990s.

Professor McCarty will work with his collaborator, Professor Matthew Jockers. Jockers is Associate Professor of English at the University of Nebraska, Faculty Fellow in the Center for Digital Research in the Humanities, Director of the Nebraska Literary Lab and, during his current sabbatical year from fall 2014 to 2015, Principal Research Scientist at Apple Computer in Cupertino, CA. Jockers specializes in text analysis and computational approaches to the study of large text collections. His books include Macroanalysis: Digital Methods and Literary History (UIUC 2013) and Text Analysis with R for Students of Literature (Springer 2014). He has published articles on topic modeling, authorship attribution, Irish and Irish-American literature, and he has co-authored several amicus briefs defending the fair and transformative use of digital text. His work has been profiled in the New York Times, The Times Literary Supplement, Nature, the Chronicle of Higher Education, Nautilus, Wired, New Scientist, Smithsonian, NBC News, and many others.