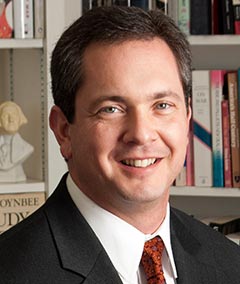 America would not exist without rhetoric. John Quincy Adams observed that rhetoric is essential to democracy. The Declaration of Independence and the Constitution stand on firm rhetorical foundations, and rhetoric has shaped debate on issues from abolition in the nineteenth century to abortion in the twenty-first.

Legislation requires deliberative rhetoric; the courts require judicial rhetoric; and public events call on ceremonial rhetoric. How does it work? How have American leaders deployed it to persuade, to rally, to warn, to heal, to inspire, to celebrate, and to challenge? This seminar considers examples of rhetoric in American history to discover their formal structures and to see how they engage surrounding events in order actively to shape them.