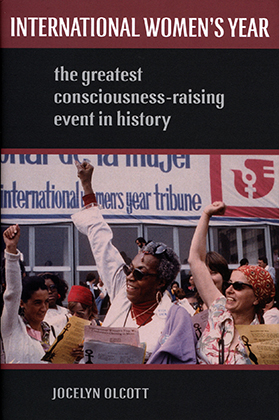 How do scholars become fascinated by their subjects and what is it like when they make a new discovery? How does the process of research, analysis, writing, and teaching change their perspectives of the world?

Join Professor Jocelyn Olcott for a discussion of her new book, International Women’s Year: The Greatest Consciousness-Raising Event in History, and her journey as a scholar of transnational women’s history. Olcott appears as a part of the Conversations with Scholars series presented by the Southwest Regional branch of the Durham County Library and the National Humanities Center.

Originally from San Francisco, Jocelyn Olcott has spent her career exploring the lives and work of women in 20th-century Mexico. Trained at Princeton and Yale, she now makes her home in the Triangle as an associate professor in the history department at Duke University. Her fascinating new book, International Women’s Year: The Greatest Consciousness-Raising Event in History, which appeared earlier this year to wide acclaim, explores the United Nation’s first world conference on women in 1975 in Mexico City.